This is an article I came across this week produced by the Shanxi Province branch of Xinhua News Service in 2004. It's more than 5 years old and China has been working on these problems, but environmental monitoring reports published this year suggest that the problems persist. My translation of the article follows:

When people talk about pollution, they mostly discuss industry. In fact, nonpoint pollution from agriculture is hard to track and control. From “lean meat powder”(clenbuterol) to toxic food, from food pollution to soil degradation, agricultural pollution is a heavy topic. 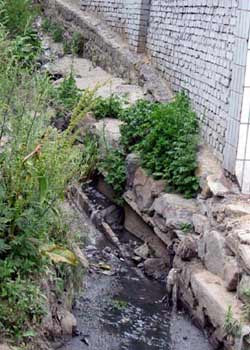 The reporter went to visit some rural areas near the city of Taiyuan. Farmers there use large amounts of chemical fertilizer to increase soil fertility. One farmer said: “Before we used two bags of fertilizer for 5 mu of land, but now we use three or four bags.” The reporter asked, “Why not use household waste as fertilizer?” The response: “That’s too much trouble!” 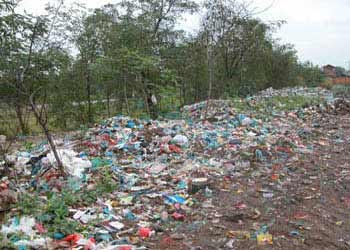 According to the Shanxi soil fertility station, one-third of chemical fertilizer is absorbed by crops, one third goes into the air, and one third accumulates in the soil. Most "blind use" of fertilizer has become a kind of predatory development. It not only has little effect on growth of crops, but also undermines the internal structure of the soil, causes soil compaction and loss of fertility. 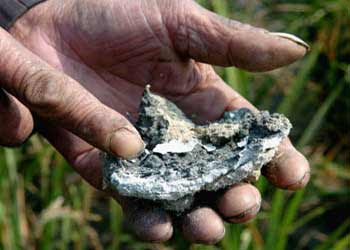 Soil calcification is serious in many areas
Many farms dump manure in waterways or pile it up randomly. After entering bodies of water or shallow groundwater, it consumes a lot of oxygen, so other microorganisms can’t live in the water, causing a serious “organic pollution.” Surveys show that one cow’s discharge of wastewater is more than that of 22 people, and a pig produces as much waste waster as 7 people.

The reporter heard that in Jinyuan district a farmer lost fish equivalent to 10,000 kg because a pig farm dumped waste in the pond, reducing the oxygen in the water and fish died of hypoxia.

In pursuit of high yield and pest control, high use of fertilizer and pesticides creates pollution and serious health hazards. According to Mininstry of Agriculture statistics: pesticide annual applications on 95% or more of crops, fruit trees, and flowers total 800,000-1 million metric tons. This explains why our country’s pesticide pollution has reached a serious level. Measures must be taken to address it.

In the first half of this year, MOA went to some supermarkets in Taiyuan, wholesale markets to test vegetables. 16% of samples were over the national standard limits. In April, testing in supermarkets and vegetable production areas by the Shanxi agricultural dept found 45 out of 76 samples were over limits. Of those, cabbage, spinach leafy vegetables had clearly higher residue levels than tomatoes and eggplant. Heavy metals like mercury were double or more the usual levels in each type of vegetable. Workers said, “If a person eats mercury-contaminated food for a long period, they can be chronically poisoned, experiencing physical and memory loss, dizziness, mood swings, sleep loss, and other symptoms. Testing by Shanxi agricultural officials in vegetable production areas conducted in June found standards were not met in 18 out of 24 samples.

The Provincial environmental protection testing center supplied materials showing that agricultural pollution is getting worse and is a threat to the safety and quality of agricultural products. Industrial pollution, fertilizer, pesticides, and hormone use, is serious on 1.2 million mu (198,000 acres); agricultural chemical use is heaviest in Taiyuan, Linfen, Datong cities suburbs. Some 10 million mu (1.65 million acres) are relatively polluted, mostly in Taiyuan, Linfen, Yuncheng grain and cotton producing areas, with pesticide, fertilizer, and heavy metal pollution. The environmental protection station tested 99 samples of 3 vegetable types in 33 markets and found the quality and safety of vegs has varying degrees of pollution, especially heavy metal contamination in this city’s veg production area, worse than in previous years. This year pollution from large scale animal waste and unreasonable use of pesticides and fertilizer has been on a rising trend.

The reporter found that farmers trying to cut costs use pesticides with low prices, high toxicity and high residues. In Xiaodian district, a major vegetable-producing area, many vegetable farmers use a type of black market pesticide. Farmers said it can keep leaves green and promote growth. The reporter asked, “Do you eat these in your home?” The farmer smiled mysteriously, shook his head, and replied, “We don’t eat this kind ourselves.”

An informed source told the reporter this is actually a prohibited highly toxic pesticide that can accumulate in roots and stems over long periods of use, producing “toxic vegetables.” But the price is half that of government-approved pesticides, saving farmers over 300 yuan in expenses per mu. Driven by profits, farmers secretly use the prohibited substance.

In greenhouse production farmers use toxic pesticides to kill pests in the ground, contributing to high pesticide residues. One farmer justifies it by saying, “In recent years pest pressures have become more serious. If we don’t use some toxic pesticides we can’t keep pests under control.”

Investigation shows that high fertilizer use has already contaminated surface and ground water, and pesticide monitoring shows residues are becoming more serious. Insecticides account for about 78% of pesticides, mainly highly toxic ones like methamidophos and dichlorvos. Surveys by the plant protection department showed that 32.8% of farmers used highly toxic pesticides on leafy vegetables and pesticide use is increasing 10% or more annually.

The reasons are current and historical. Most agricultural pollution is from sediment from soil erosion. This sediment contains various chemical substances that constitute agricultural pollution. Nitrogen and phosphorus from the crop fertilization process and animal farms accumulates on the soil surface, which is from there easily washed into bodies of water by rain and contaminating irrigation water downstream.
Posted by dimsums at 2:13 PM