China is waging war on meat and seafood smuggling as authorities pile on barriers to legal imports that include strict approvals, reams of documentation, and onerous covid testing, disinfection and tracking.

Chinese state-controlled media have reported a series of smuggler interceptions this year from just about every coastal province. Several articles reveal there is a national crackdown on smuggling underway.

Official media reported that the coast guard had intercepted 75 ships smuggling over 8000 metric tons of frozen products from January 1 to March 15 this year.

Local media in Jiangmen City in Guangdong Province reported that the coast guard intercepted two boats loaded with 70 metric tons of beef and tripe packed in white bags on May 25 and 27. The products were valued at 7 million yuan (over $1 million). In April, Guangdong's anti-smuggling office reported 398 cases involving over 18,000 metric tons of frozen food smuggling this year, with 1667 people arrested. Guangdong raised the maximum reward for turning in smugglers from 200,000 yuan to 500,000 yuan.

Beihai City in Guangxi Province announced the sentencing of a pair of smugglers who conspired to transport 7 tons of smuggled Indian beef to the provincial capital of Nanning last December. India has not been approved to export beef to China due to concerns about foot and mouth disease.

On May 13-14 the coast guard in Xiamen, Fujian Province, intercepted two boats smuggling 340 metric tons of Brazilian beef and offal.

Last week authorities in Jinan, the capital of Shandong Province, reported the launch of an anti-smuggling crackdown system targeting frozen food, agricultural products, refined petroleum and wild animals and plant products. An "alliance" coordinated by Shandong's anti-smuggling office includes a district government in Jinan, the police, market supervision bureau, city postal bureau, and the first association of "volunteers" from the business community is said to be a model for inland provinces (Jinan is a couple hundred miles from the ports of Qingdao and Yantai).  The alliance's slogan, "communist party-guided + government leadership + volunteer friends," was praised by national anti-smuggling authorities.

At the Shandong anti-smuggling meeting, officials were warned to be soberly aware of the continued high incidence of smuggling, and that smugglers are specialized, organized, and using high-tech methods to better evade authorities. Officials were ordered to be aware of the urgency, open the main door and block the evil door, and to resolutely maintain an orderly market economy with a secure and stable society.

The Chinese-language edition of China Daily reported that 700 metric tons of frozen meat were seized from two ships intercepted by the coast guard May 24-25 in waters near Zhejiang Province. China Daily explained that huge demand and strict requirements for exporters are responsible for sustained smuggling. China Daily explained that not that many foreign companies can satisfy the strict requirements to qualify for a license to export frozen food to China. Moreover, there are tariffs and value added taxes levied on legal imports. China Daily cited the impact of China's covid virus control procedures for frozen food--nucleic acid testing, disinfection of imports, and destruction of products--as another factor boosting the cost and time required to clear customs for legal imports. China Daily explained further that imported meat offal is much cheaper than in China--due to American and European differences in eating customs--and waivers of tariffs and other import barriers for residents of border areas are frequently abused to facilitate smuggling.

The articles on smuggling interdictions often report that smuggled items had no documentation or lacked certificates showing that the country of origin had been approved for export to China.

The number of rejected seafood and meat shipments reported by China's customs officials has increased noticeably since June 2020 when China first began emphasizing the risk of covid-on-frozen-food after attributing an outbreak in Beijing to Norwegian salmon. None of these rejections cite covid, but lack of documentation and lack of inspection and quarantine approval are two common reasons. Covid is never cited in these rejections but dozens of rejections of shrimp from Ecuador that have been reported as contaminated with the virus have cited "animal disease" as the reason for rejection. 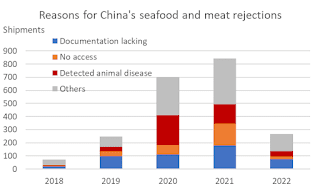