China can reduce its food import risk by importing low-quality wheat from the Black Sea war zone because importing from Canada is too risky. This is the latest idea peddled by China's "food security" propagandists struggling to tout a Xi-Putin wheat trade deal while simultaneously assuring the public that the country doesn't really need to import wheat.

Yicai, a communist party-controlled business news outlet, observed last month that 80 percent of China's record-high wheat imports in 2021 came from the United States, Canada, and Australia, while less than 1 percent came from Russia. The propaganda directives were apparently to allay concerns about wheat supplies in view of bad news about this year's wheat crop announced by the agriculture minister AND to give a boost to the February 3 wheat trade announcement by new best friends Xi Jinping and Vladimir Putin.

Yicai noted that the "record-high" 9.77 million metric tons of wheat imported in 2021 was just 7.1 percent of the amount China produced (fact check: this was not a record--China imported 10-to-15 million tons of wheat nine years during the 1980s and '90s). Yicai recited additional talking points: China's production, reserves and supply are plentiful and the country only needs to import 3-to-4 million tons of wheat annually to fill gaps in classes of high-quality wheat.

An agriculture ministry expert quoted by Yicai insisted that China is reducing its need for imported wheat as a "supply side structural reform" program expands domestic supplies of wheat with strong and weak gluten. The expert offered no explanation for the surge in imports during 2020 and 2021. An April 7 Xinhua article intended to dispel concerns about wheat supplies quoted Senior National Grain and Oils Information Center grain market analyst Wang Xiaohui who claimed that annual consumption of wheat as food is stable at about 90 million tons while feed use fluctuates between 7 and 35 million tons. He had no explanation for why China increased its wheat imports so much in a year of record-high domestic wheat output.

Yicai's main concern is the risk posed by relying on five countries for 90 percent of China's wheat imports: Canada, Australia, the United States, France, and Kazakhstan. A study by China Agriculture University deemed this mix of suppliers to be "unreasonable" and undiversified. While Canada has low wheat prices and high quality, the professors said, importing Canadian wheat poses "a high risk"...because "Canada's affairs are greatly influenced by the United States." (The article never mentions ZTE executive Meng Wanzhou's detention, AUKUS or any other specific risk; fact check: Canada's share of wheat imports only reached 50 percent during 2018-19.)

Yicai did not offer an explanation for the 30-percent surge in Chinese wheat prices over the past year. Nor did Wang Xiaohui--quoted in the Xinhua article--explain why Chinese wheat prices began rising after last year's record harvest. Wang described the increase in wheat prices as a good opportunity to dispose of aging wheat stocks without affecting national food security. 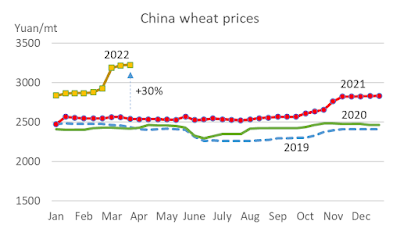 Yicai then jumped to the conclusion that China should import more wheat from Russia and Ukraine, describing Russia's emergence as the world's top exporter in 2017 as "shocking the 'old order.'" The China Agricultural University professors told Yicai that wheat exports from the Black Sea region could grow a lot over the next 10 years, and suggested the region could replace China's traditional wheat suppliers to a certain degree.

However, Yicai acknowledged that the quality of Russian wheat does not line up with China's needs for high-quality wheat. In fact, China's customs data says China imported only 55,000 metric tons of wheat from Russia--only 0.5 percent of last year's total. Ukrainian data shows a paltry 245 tons of wheat exported to China.

Yicai acknowledged that China's imports of Russian wheat have been kept to a trickle due to concerns that it could transmit a fungus--TCK smut. Concern that the fungus could spread to Chinese wheat has prompted Chinese authorities to go slow on importing wheat from Russia. This is also a risk, although Yicai did not identify it as such.

When China's border authority approved wheat imports from Russia in 2016, only four regions were allowed to export to China due to concerns about fungus. In 2017, the Manzhouli border crossing in Inner Mongolia began importing Russian wheat, but all of the grain had to be processed at the border crossing before entering China. In 2021, China's COFCO trading company imported 667 tons of wheat from Russia's Far East at the Heihe border crossing but the wheat had to be unloaded at a customs warehouse.

The Russia-China phytosanitary agreement on wheat trade announced in February 2021 allowed imports of wheat from all regions of Russia, but it included numerous stipulations aimed at preventing transmission of TCK smut and other harmful organisms. Russia wheat can only come from areas free of TCK smut and can only be spring wheat used for industrial processing. The document stipulates that Russia must monitor presence of harmful organisms to allay Chinese concerns and issue a notice and cease shipments of wheat from regions where TCK smut is detected. Russian wheat must be shipped to China in dedicated transportation equipment; soil, plant debris and weed seeds must be removed; and shipments of spring wheat cannot be being mixed with winter wheat or wheat from regions with smut.

Russian trade data shows there has been a huge increase in Russian wheat exports to "unidentified" destinations, from 12,000 tons to 1.6 million tons between 2019 and 2021, suggesting the possibility of booming illicit trade with China.

Yicai does not clearly explain the rationale for importing low-quality wheat which China already has in abundance. The China Agricultural University Professors speculate that Russian wheat could be used as animal feed to replace imported corn and soybeans due to its low price and protein content exceeding that of corn.

Russian and Ukrainian wheat exports go primarily to countries like Turkey, Egypt, Nigeria, Azerbaijan, and other middle eastern, African and Asian countries that are less discerning on quality. Thus, if China did import wheat from Russia and Ukraine, Chinese pigs and chickens would be competing with humans in the Middle East, Africa, and South Asia for wheat from the Black Sea region.

Yicai speculated that Kazakhstan could be a potential source of milling-quality wheat imports, but China's imports of Kazakh wheat fell from 400,000 to 179,000 metric tons between 2019 and 2021.

In an apparent example of import diversification, China's wheat imports from Lithuania grew from 0 to 300,000 metric tons between 2018 and 2020--but imports fell to zero again in 2021 after Lithuania allowed Taiwan to open an embassy there.

Clearly China is politicizing grain trade...and perhaps maneuvering for a war of its own.

China's "food security" pronouncements are becoming more unhinged and inconsistent as its "food security" objectives expand. The kooky idea of reducing risk by importing from countries at war and under international sanctions follows up a year of pronouncements that China can magically reduce its reliance on imported soybeans and corn by recommending use of other ingredients that are also imported and yet another campaign to increase soybean self-sufficiency.

China's propaganda appears to have sunk into Orwellian absurdity to support the ambitions of a leader desperate to solidify his hold on power. This has happened before in China. It resulted in the worst-ever famine and ended with China importing 10-to-15 million tons of wheat annually in the 1980s after that leader finally left the scene.

Thanks for sharing this wonderful information through this blog, along with want to know more information please visit.
Online Wheat