"Large pig farmers are no different from small and medium investors...they chase the huge fluctuation in pork prices up and down." So observed a commentary on China's feedtrade.com.cn web site earlier this month.

China's agricultural leaders have long blamed "blind" expansion by small "backyard" farmers for the constant gyrations in China's pork industry, but the country's new gang of big hog producers are adding production capacity with little regard for the depressed state of the market, driving the price further below the breakeven point. 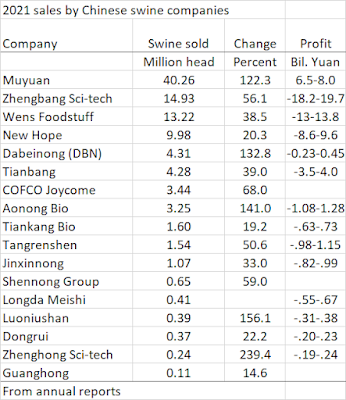 China's biggest hog company, Muyuan Foods, was the only big pig-farming company that reported a profit in 2021, although its profit was way down from 2020. Muyuan's performance data indicate that they also lost money in the fourth quarter. In mid-2021 some investors questioned the truthfulness of Muyuan's financial data, the company received visits from government auditors, and there were reports of unpaid bills late in the year. It seems biologically impossible that Muyuan could expand production from 18.1 million head to 40 million in a single year.

The second-largest hog company and the one with the biggest loss was Zhengbang Sci-tech, with hog sales of 14.93 million head in 2021. Its estimated loss of 18.2 to 19.7 billion yuan was tops among hog companies and exceeded its cumulative profits for the previous five years since it was publicly listed. Zhengbang racked up debts of 44 billion yuan and boosted its debt-asset ratio from 50% to 75% buying barns and sows all over China in a breakneck expansion program last year.

Hog prices are still well below break-even levels with demand having weakened after the end of the peak spring festival period. Industry reports say hog prices are not expected to stage a recovery until 2023. Yet companies are planning to continue expanding this year. Muyuan aims to boost its production from last year's 40 million head to 50 million head this year. Wens Foodstuff, the number-3 producer, hopes to increase its output 30-to-50 percent from last year's 13.2 million head. Even debt-strapped Zhengbang plans to continue its aggressive expansion.

How do money-losing companies finance aggressive expansion? In 2021, a hog industry stabilization document issued by China's agriculture ministry and five other agencies ordered banks to keep the money spigot open for pig farms. The document ordered banks to accept all kinds of collateral from hog farms--including rights to village land, barns, live pigs, machinery and equipment--and ordered banks not to stop lending to hog farms or slaughterhouses or call in loans when they have business difficulties. China's bank and insurance regulatory commission was one of the agencies issuing the lending order.

Debt-laden Zhengbang recently was named a key customer of the Agricultural Bank of China and received special lines of credit from suppliers and from the Jiangxi and Shanghai branches of the Bank of China to help tide the company over in the depressed market. After Zhengbang's share price cratered recently a State-owned investment company and a railway company in Zhengbang's home province of Jiangxi recently injected funds into the company to keep it solvent.

Muyuan is the prototype of gigantic companies relying on application of big data, cloud computing and artificial intelligence to lead the hog industry into the future. While it is the only major hog company to report a profit in 2021, its highly capital-intensive production model continually sucks in funds. Muyuan's self-contained production model seriously clashes with the inclusive model of development set forth in China's five-year plan for modern agriculture. The plan calls for keeping small farmers engaged as the main actors in agriculture, but Muyuan's model keeps all production within the company from breeding and farrowing to fattening and slaughter.

The high cost of building expensive automated facilities is the inverse of the traditional backyard model. One independent farmer raising 3000 hogs in Jiangxi commented that his farm has a cost advantage over the big hog-farming companies.

Thus, in order to keep the big hog-farming companies in business, officials will have to eject small-scale independent farmers from the business to cut excess production capacity and clamp down on meat imports in order to boost prices to cover the costs of capital-intensive pig farming.