China produced another record grain harvest, according to a communique on 2021 grain production released by the National Bureau of Statistics. Output was 682.9 million metric tons (MMT), up 13.4 MMT or 2 percent from last year.

A Bureau official attributed the rise in grain production to strict control of cultivated land by each level of government carrying out their responsibility for grain production. Local leaders prevented farmland from being left idle, demanded that crops be planted on idle land, ensured cropland was not diverted to nongrain crops, reclaimed land for agricultural use, and increased farmers' enthusiasm for planting grain crops, the Bureau official explained. The report said 117.6 million hectares of land was planted in grain, up 0.7% from the previous year.

Corn production resumed to its historic steep path of growth after a 5-year interruption. Corn accounted for most of the increase in this year's grain production. Soybeans were the only major crop to post a decline in production. 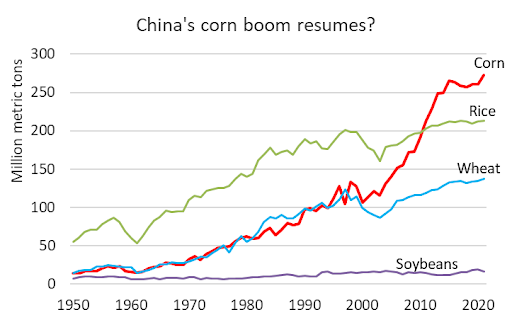 Just six years ago China was suffering from a glut of corn. The agriculture ministry's "supply side structural adjustment" initiative called for cutting back on corn production and rotating corn with beans, minor grains, fodder crops, and other less environmentally damaging crops. Corn was to be cut back in an environmentally fragile "sickle-shaped region" stretching from northeast provinces through semi-pastoral areas, arid northwestern provinces, and the mountainous southwest. The plan called for cutting back corn area from 38.1 million hectares in 2015 to 34.7 mil. hectares in 2020.

That plan was conveniently forgotten after several years of corn auctions emptied out warehouses and corn prices shot up in 2020.

The 2020 target was also forgotten because calling attention to it would necessitate explaining a big statistical blip in corn data. The Statistics Bureau's 2017 agricultural census discovered an additional 6.85 million hectares of land planted in corn, and corn statistics were revised upward by 20%. The statisticians decided they had been undercounting corn production for a decade and revised their numbers retrospectively back to the previous census in 2007. The current data published by the Bureau show that area planted in corn in 2020 was 41.26 million hectares, 6.6 million hectares above the target set in 2015. 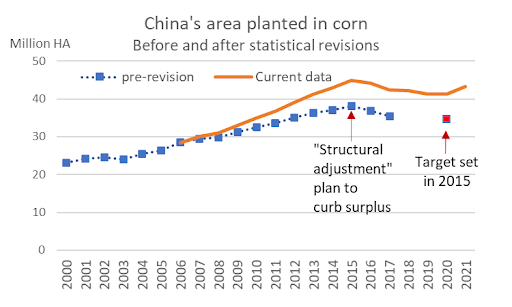 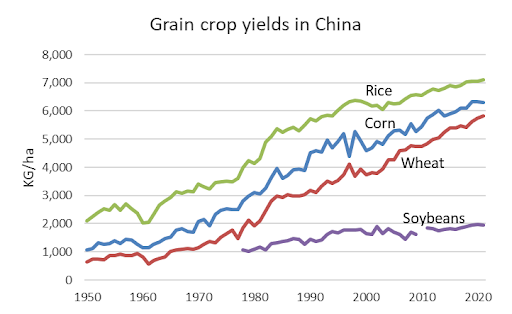