China's swine industry is in liquidation mode exactly two years after hog supplies cratered in the fall of 2019. In August 2019, a vice premier ordered officials to build hog farms to replenish pork supplies asap. Now the same officials are being ordered to pare back herds in their provinces and counties.

China's Economic Weekly reported that six of the top hog-producing companies in China reported losses for the third quarter of 2021. That includes a loss of 500 million to 1 billion yuan for the largest company, Muyuan, a loss of 2.58-2.98 billion yuan for New Hope Group, and a loss of 6.75-7.25 billion yuan for Wens Foods. In Hunan Province, farms are reportedly taking losses by selling weaned pigs to barbecue restaurants because the farms would lose even more by raising them to slaughter weight.

The pork glut is an outcome of frenzied expansion. Last year the chairman of hog company Tangrenshen told Economic Weekly that companies like his planned to add production capacity totaling 2 billion head, more than three times annual consumption of about 650 million head. A September 2021 notice issued by an organization overseeing the Hunan Province livestock industry warned that many big farm projects have been abandoned, leaving creditors and prospective contractors in the lurch, dodging their "social responsibility" and creating a "hidden risk."

At a press conference this week, the Ministry of Agriculture and Rural Affairs noted that the pork surplus is so serious that hog prices did not rebound during the peak mid-Autumn festival and National Day holidays, and farms of all types are incurring deep losses. The Ministry estimates that the swine sector has about 10% surplus production capacity and reports that sow numbers have fallen three months in a row since July. A Ministry official suggested farms cull one low-productivity sow from every ten in the herd, cull one extra runt from each litter, and slaughter fattened hogs 10 days early. The Ministry reported that the number of hogs slaughtered at above-scale facilities in the first nine months of 2021 was up 61 percent from the previous year, and slaughter at those facilities in September 2021 was up 95 percent year on year.

According to the National Bureau of Statistics, 492 million hogs were slaughtered in the first nine months of 2021. That's 36-percent more than were slaughtered in the same period of 2020, but about the same as production in 2018--before the African swine fever epidemic decimated the herd. The Bureau reported that third quarter 2021 hog prices were down 55.5 percent year on year.

How is it that China's pork market has reached a saturation point with deeply depressed prices with production about the same as two years ago? China's pork output for January-September 2021 was reported to be 39.2 mmt--up 10.8 mmt from the same period in 2020. This year's pork output so far is about the same as during the same period of 2018--before the African swine fever epidemic began. 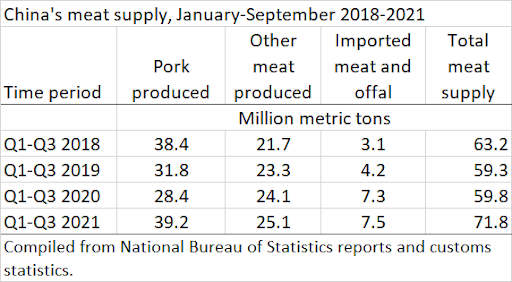 A broader view including meat imports and production of other meats shows the overall meat supply is up about 14 percent from 2018. The greater supply of pork alternatives and crimped travel and food service from strict covid-19 lockdowns cutting into demand could explain why China's pork market is saturated.
China cranked up production of other meats. The National Bureau of Statistics reported that poultry meat output in January-September 2021 was up 3.8 percent year on year, beef was up 3.9 percent, and mutton output was up 5.5 percent. Total meat production was up 22.4 percent. Over the last four years production of these other meats in the January-September months has grown from 21.7 mmt to 25.1 mmt, net growth of 3.4 mmt. The volume of imported meat and offal during the same period grew from 3.1 mmt to 7.5 mmt, growth of 4.4 mmt. Adding these together, the total January-September meat supply grew from 63.2 mmt to 71.8 mmt between 2018 and 2021.

China has the dubious distinction of being not only the biggest pork producer and consumer in the world, but also the highest-cost producer. Imports now constitute a significant portion of supply. China's 3 million metric tons of imported pork so far in 2021 constitutes about 7 percent of the pork supply. The 7.5 mmt of all meat and offal imported in the first nine months of 2021 constitutes 11 percent of the country's January-September meat supply.

Targets set last year call for limiting pork imports to 5 percent or less of the supply and beef and mutton imports at 15 percent.

The Ministry of Agriculture and Rural Affairs is now instructing local authorities to issue warnings to hog farmers about market conditions and to urge them to pare back their herds. At the same time, the government says it is retaining policies subsidizing the industry--favorable access to village land for hog farms, special treatment in enforcement of environmental regulations, earmarked and subsidized loans, and subsidized insurance.