China's hog market boom has turned to bust, feeding worries in corporate boardrooms and government offices. As profits and equity vanished, pig producers have pulled back on feed purchases and trimmed expenses.

China's African swine fever (ASF) epidemic produced a 2-year M-shaped price cycle. The first cases of ASF appeared in August 2018, but hog prices were depressed until mid-2019 as farmers killed off their herds to avoid the epidemic. Prices soared about 150 percent in three months--reaching their peak in November 2019. Hog prices fluctuated in mini-cycles until they crashed during the first half of 2021. China's hog prices are now back where they started in 2018.

At these prices most hog producers are said to be losing money. Farms monitored by China's Ministry of Agriculture and Rural Affairs posted a 9.7-percent loss in May 2021. Most corporate hog-farming companies reported substantial losses or declining profits for the first half of 2021.

The popping of the hog price bubble is also wreaking havoc with balance sheets. Most of China's publicly listed hog-farming companies enjoyed soaring stock prices in 2019 as it became evident that a severe shortage of pigs was on the horizon. Most share prices doubled at some point during 2019-20, and some soared as much as 350 percent above their 2018 values. However, shares began deflating in 2020 in anticipation of a rebound in supply and thinning profits. Some shares are still above their 2018 values but far off their earlier highs, but others have lost value, on net, since 2018.

Yahoo Finance rates all these stocks as "strong buys", by the way.

Muyuan Foods is the biggest hog producer and best performer. Muyuan's share price soared from 10 yuan in 2018 to a peak of 80 yuan in early 2021. Even Muyuan shares are off this year, but the price is still 4 times its 2018 average. Muyuan's hog production grew four-fold, from 10 million head to 40 million head last year.

Apart from Muyuan and a few others, most hog-farming companies in China posted financial losses in the first half of 2021.

The chairman of New Hope Liuhe issued an open letter of apology for the company's first loss in many years, citing dual impacts of ASF and covid-19, weak consumer demand, resurgence of ASF, and the rebound in hog supplies since last year for the poor performance. Apologizing for not "keeping up with the times," he promised to focus on cost-cutting, replace the management team and nurture a cadre of younger managers.

The 81-year-old chairman of Hong Kong-listed WH Group--owner of Shuanghui and Smithfield Foods--stepped down, but the move was said to be unrelated to the company's performance -- visibly worse than the Hang Seng Index. The company had to write down the value of its pig inventory due to falling prices, while rising costs trimmed profits in its U.S. and Europe operations.

Some observers see Muyuan's superior performance versus Wens Foodstuff as validation of Muyuan's fully-integrated farrow-finish production model. Wens was an early adopter of the "company + household" model in which the company has a loose relationship with individual farmers who buy chicks/piglets, feed, medications from the company and raise animals to market weight. Government officials cite this "company + household" model as central to their poverty alleviation strategy and one of the factors boosting swine production.

Big companies are clearly playing a significant role, but family-run microenterprises still comprise the bulk of hog production. The Ministry of Agriculture says that 57 percent of hogs were produced by farms slaughtering 500 head or more in 2020. (That was 5 percentage points higher than the target set by the 2015-2020 five-year plan.)

Data from a company registration database show that there are 376,500 registered hog businesses in China, but 73 percent have less than 1 million yuan (about $150,000) in registered capital. Just 3 percent have capital of over 10 million yuan ($1.5 million). The biggest influx of new hog businesses was in 2020, when 77,600 were registered. These "new" enterprises likely represent official registrations of existing "backyard" farms that had to formally organize their business to get loans and other subsidies handed out by local officials last year.

The financialization of hog production surely played a key role in recovery of the hog industry. Soaring stock prices for publicly listed companies got big influxes of capital they could leverage with borrowing. Smaller farmers accustomed to operating hand to mouth got investments from family and neighbors. Bank loans and land leases were key policy measures used to expand hog farms. Now that profits and equity have vaporized, the farms--both big and small--surely find themselves over-leveraged.

Government officials seem worried that money-losing hog farmers will quit en masse, causing further gyrations in pork supplies and prices. Farmers Daily advises hog farmers that the days of high profits from pigs are over and the era of cost-cutting has now arrived.

Feedtrade.com.cn reported examples of individually-operated hog farms that are cutting back on their herds, saving money on feed by substituting cheap materials and by dialing back daily feed rations and animal growth rates. Big companies are getting into cost-cutting mode too. Wens Foodstuff says it is adjusting feed formulations to cut costs, using wheat in place of corn, and reducing soymeal use. New Hope, DBN and Wens pledged to stop purchasing feeder pigs and breeding stock from outside the company, cull low-productivity sows, and stop building new projects.

Zhengbang Company reportedly raised the productivity of sows to an estimated 20 pigs per sow after eliminating 50,000 low-productivity sows in Q2 2021. Breeding stock imported by Zhengbang during November is expected to reduce piglet costs next year when the progeny of these high-quality animals reach the commercial herd. The company hopes to reach 25 pigs per sow then.

A new countercyclical mechanism for the hog market announced by six government agencies reflects the concerns. An ag ministry official's Q&A on the countercyclical program raised concerns that the hog market still lacks a solid foundation despite ample pork supplies and full recovery of production capacity. He worried that falling pig prices might encourage both farmers and local officials to lose their enthusiasm for hog farming, throwing the sector's expansion abruptly into reverse.

Two years ago local officials were given hog production quotas and assigned to implement support policies--some localities rolled out 19 hog farm support measures. The ag ministry official worried that local leaders might amplify the downturn by withdrawing favorable land-use and easy environmental assessments for hog farms or by resuming declarations of pig-free districts and counties. Banks are ordered not to call in loans or stop lending to pig farms. With rising production costs and risk of recurrences of ASF, the official declared that the task of stabilizing hog production and guaranteeing pork supplies is "huge."

The program targets a sow inventory of 43 million head (and no less than 40 million), with advice issued to farmers when sows change by +/- 5% monthly, and market interventions when sow numbers fall 10%. A "normal" pork output of 55 million metric tons is targeted. The program calls for officials to ensure credit is available to hog farmers and to refrain from banning pig farms or assist them in relocating if a farm really needs to be demolished. The plan calls for establishing a platform for issuing market information and early warnings.

The countercyclical program calls for "scientific guidance of import rhythm" which sounds like a veiled plan to allow pork imports when domestic supplies are tight and raise barriers to imports during  downturns in the Chinese industry. The program reiterates a 95% self-sufficiency target for pork that was first declared in a September 2019 State Council. 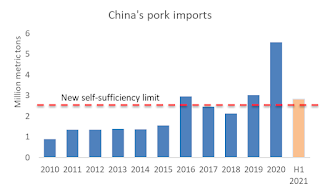 Watch for Chinese news media throwing shade on foreign pork and feed additives. The recent report in State media about the son of the WH Group chairman criticizing the Smithfield acquisition could possibly be the opening salvo (see this blog's August 9 post). Will containers of rancid foreign pork be discovered in Shanghai? Will exporters be shut down for insufficient covid prevention controls? Will the ASF virus mysteriously jump from the Dominican Republic into North America?