With China's cities expanding at a rapid clip, the loss of farmland seems to have set off alarms among Chinese leaders, but statisticians are not allowed to report farmland loss.

Rapid urbanization was one of the most notable features in China's new population census data, released last week. China added 236 million to its urban population between 2010 and 2020, while its rural population shrank by 164 million. The population was 64 percent urban in 2020, up from 50 percent in 2010.

Urbanization is a reversal of China's heritage as a nation composed primarily of rural peasants. The urbanization rate was only about 10 percent when the communist regime took over in 1949. Most people lived directly off the land, and only a small portion of the food supply was needed to feed city-dwellers.

The urbanization rate began its long upward climb with "reform and opening" in the late 1970s. The  64-percent urban share of population in the 2020 census seems to have taken the statisticians by surprise. It was 3.3 percentage points higher than the 2019 urbanization rate reported last year by the National Bureau of Statistics. Now, with most people living in cities, most of the food must move through a huge, complex marketing system to feed the people. Chinese leaders worry that cities may be fed by imported food they can't control. Hence the slogan, "Chinese peoples' food bowls must be firmly in their own hands."

Case in point is Guangdong Province, China's most populous province (126 million people), teeming with migrants and working-age people, according to the new population figures. One commentary on the population census figures noted that now only a few of China's provinces produce more grain than they consume. Guangdong relies on 41 million tons of imported grain and purchases from grain-surplus provinces to fill its supply-demand deficit, according to a 2018 report by its grain bureaucracy. The commentator insisted that China must follow the road of "food security with Chinese characteristics" to keep China's food bowl firmly in its own hands, in view of "rigid growth in grain consumption" and depleted water and soil resources.

On May 7, Premier Li Keqiang proclaimed, "Maintaining the food security of 1.4 billion Chinese people is a great contribution to the world." In his speech, Li gave "strict orders" to strengthen control of cropland use, resolutely curb the diversion of agricultural land to nonfarm uses, prevent planting of non-grain crops on land designated for grain production, and "strictly guard" the 1.8-billion mu (120 million hectares) "red line" for cultivated land. Li called for progress on the next 100 million mu (6.7 million hectares) of "high standard fields" resistant to droughts and floods.

Despite apparent nervousness about a shrinking farmland base, Chinese statisticians have been reporting growth in cropland area. Official data reported 95 million hectares of cultivated land during the 1990s, a total that was acknowledge to be underestimated due to farmers and villages under-reporting land to dodge taxes. The first agricultural census in 1996 included a special survey to measure the cropland base, and raised the total to 130 million hectares. The 2006 census found the cultivated land base had shrunk to 122 mil. ha. This decline apparently was not acceptable, as a new survey by the Ministry of Land Resources immediately discovered 135 million hectares of cultivated land which has been reported ever since. The 2016 agricultural census (released in 2018) reported the Ministry of Natural Resources cultivated land area statistic. The same statistic has been reported in each yearbook since then. 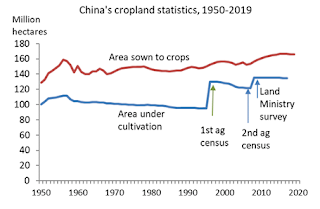 A commentary by China Grain Net last month warned that China's land resources are near their limit. The commentator estimated that food imports represented a shortage of agricultural land of more than 51 million hectares. The country cannot easily add to its cropland base, the commentator warned. The situation is worsened by the loss of organic matter in soil, erosion, hardening of soil, and acidification of soil through loss of potassium, calcium, and magnesium. According to the commentator, the pH rose above 5.5 in 35 percent of the soil in rice-growing provinces Jiangxi, Hunan, and Guangxi over the past 30 years, reducing productivity by 20 percent. A 2019 Agriculture Ministry soil classification found 22 percent of soil is low-yielding, 47 percent is medium, and 31 percent is high-yielding. The Ministry hopes to raise grain production by upgrading soil productivity.
Posted by dimsums at 9:27 PM

statisticians are not allowed to report farmland loss?