China has imported 9 million metric tons (mmt) of corn in the first 11 months of 2020, China's largest-ever corn import total. The corn import total exceeded the country's 7.2-mmt tariff rate quota (TRQ) for the first time as of October after falling short of the quota every year since it was established in 2001. An additional 1.23 mmt imported during November pushed the 2020 total even further beyond the quota.

China's January-November 2020 imports of corn from the United States totaled 3.285 mmt, a more than 10-fold increase from the 2019 total and the largest total since 2013. While efforts to meet purchase commitments from the U.S. in the Phase One agreement are one factor behind the surge, Ukraine remains the top supplier of China's imported corn in 2020 with over 5.2 mmt. Imports from Ukraine also increased this year. Other countries--including Bulgaria, Russia, Laos, and Myanmar--supplied 531,000 mt of corn through November, up nearly 200,000 mt from the 2019 total.

The surge in corn imports appears less dramatic when considered in context of China's overall feed imports. China's imports of corn, sorghum, barley, DDGS, and cassava combined totaled 23.6 mmt in Jan-Nov 2020. That total is up 9 mmt from 2019, but about "normal" in historical context. Combined corn-sorghum-barley-DDGS-cassava imports peaked at over 42 mmt during 2015 when Chinese feed mills were eager to find substitutes for pricey domestic corn. The non-corn feed imports deflated in 2016 and subsequent years with the end of the corn price support, anti-dumping/countervailing duties on U.S. DDGS and sorghum, a new set of duties imposed during the trade war, and AD/CV duties on Australian barley this year. In 2020, sorghum imports bounced back after retaliatory duties were lifted, but imports of DDGS remain minimal. 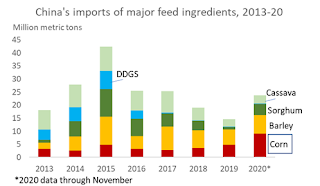 2020 is the first year after a WTO panel issued a 2019 report of written submissions and oral arguments in the U.S. challenge of China's tariff rate quota administration for grains. There was optimism in some circles that reforms of the quota system would boost imports by making more of the quota available to private-sector importers. However, some clues indicate that the government still dominates corn imports this year and the surge in 2020 imports may reflect a plan to refill reserves with cheap imported grain.
China still doesn't reveal which companies receive import quota and public statistics do not reveal which companies import grain. However, corn import statistics tabulated by the province where importers are registered give us a clue about the dominant role of COFCO. Customs data show that companies headquartered in Beijing accounted for nearly all the surge in 2020 corn imports. As of October (these data have not been released for November), 52 percent of this year's corn had been imported by Beijing-registered companies. COFCO almost certainly accounted for nearly all of these imports since most big Chinese agribusiness companies are headquartered outside Beijing. The increase in corn imports this year by companies based in Shandong and Fujian Provinces was unremarkable. Corn imports by Guangdong-based companies went down this year. 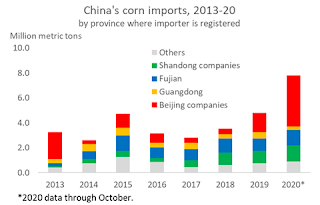 There was a signal earlier this year that the surge in corn imports reflects a program to refill government reserves with imported corn. On April 22, 2020, a "rumor" spread that Chinese authorities were considering a plan to restock commodity reserves with "10 mmt of soybeans, 20 mmt of corn, and some cotton, sugar and vegetable oil." The plan was said to be motivated to calm markets during the pandemic, take advantage of low international prices, and to meet Phase One agreement commitments to purchase U.S. commodities. China Grain Net described the reserve restocking plan as a "rumor" that needed to be confirmed by the government, but no confirmation was ever given. Yet the surge in imports of corn, wheat, and cotton this year and the predominance of Beijing-based companies appear to be consistent with the plan.
It is unclear how corn imports exceeded the quota. The margin between Chinese and international prices is not wide enough to justify imports at the out-of-quota 65-percent tariff. There is speculation that the government subsidizes grain imported for reserves or exempts reserve grain from tariffs, but that has never been announced publicly. The 2019 WTO panel report on China's TRQ dispute revealed that China has a history of managing the TRQ in an opaque, arbitrary manner, and this may be more of the same. Chinese officials have announced that the TRQ will again be set at 7.2 mmt in 2021 despite reports of purchase commitments for U.S. corn that exceed this amount.
The 40-percent increase in China's corn futures prices since the beginning of 2020 has been concentrated in the northern part of the country. Guangdong Province--one of the two largest feed-milling provinces--has backed off from purchasing domestic corn from northeastern provinces, instead stepping up imports of sorghum and barley (perhaps also feed wheat). Consequently, corn inventories at northeastern Chinese ports have built up to record levels.
In contrast to corn, customs data show sorghum is imported primarily by companies in southern provinces: Guangdong, Fujian, and Shanghai. Beijing companies imported minimal amounts of sorghum in 2020. Almost nobody imported sorghum during 2019 at the peak of the trade war (and at the nadir of swine losses to the African swine fever virus). Sorghum imports have bounced back in 2020, but they are still relatively low. Thus, the larger corn imports are to some extent offset by low imports of sorghum and other feeds restrained by other duties.
China's corn prices have some room to rise further in 2021 and corn imports could reach 20-to-30 mmt, according to futures analysts interviewed by China's Futures Daily last week. However, there are a number of uncertain factors that could affect the corn market and agricultural markets more broadly, including the potential for a global food price increase in a post-covid era, possible warming of U.S.-China relations, expansion of corn production in China next year, and impacts of weather on corn production.