Does China See a Food Crisis?

China seems to be worried about a global food crisis on several fronts. Consumers in Jiangsu, Shanghai and Zhejiang Provinces began panic-buying rice in late March, causing prices to surge. Since then, China's news media have issued articles almost daily to dispel panic but in doing so most recite alarming signs of possible spikes in prices and famine. Meanwhile, the topic is nearly absent from U.S. news media--prospects for a world food crisis rated only a brief note on the back page of today's Wall Street Journal.

On March 28, China's official Xinhua News Service published a food security Q&A to assure readers that there is no danger of a food shortage in China. The article recited the policy of self-reliance and "absolute security in food grains", the usual statistics about grain production exceeding 650 million metric tons, the small percentage of rice imported, reliance on technology and minimum price guarantees for rice and wheat, and a policy of holding massive reserves and a 10-day supply of consumer grain products and oils in cities. Xinhua promised that curbs on food exports by other countries during the COVID-19 pandemic would not have much impact on China and would, in fact, allow officials to dispose of some excessive reserves.

On April 4, the State Council Information Office held a press conference to answer softball questions from state media about the danger of a food shortage. Officials had facts and figures on grain production, reserves, grain sales, and farm inputs ready to assure the public that there is plenty of grain. In response to a question from a State news organ about whether there would be a food crisis in April or May, the head of the grain reserve administration assured the reporter that  the country is holding a year's supply of rice and wheat in reserves, and "quite a few" cities have a 30-day stockpile of rice and flour. He warned against stocking up on rice on flour at home because it could attract bugs, degrade in quality and lose its flavor. Agricultural officials assured listeners that farmers would be able to get seeds, fertilizer, and pesticides to plant spring crops. An official explained that policies would be rolled out to encourage early-season indica rice planting this year: an increase in the minimum price, 3.6 billion yuan to give farmers technical guidance, and provinces will fund rice-transplanting and other services for early rice production. Another official assured a State TV reporter that China would buy U.S. soybeans as part of the Phase I agreement, U.S. and Brazilian officials would work to ensure export of soybeans during the pandemic, and China would push forward with its domestic soybean revitalization program.

Numerous articles regurgitated this information and reported that progress on spring planting has been normal. However, a commentary on rice-hoarding noted that this information did not prevent consumers and processors in Jiangsu and neighboring areas from panic-buying rice this month. The commentator attributed the panic-buying to news about grain-export curbs, news about panic-buying in the United States (a google search in Chinese for "panic-buying" turns up mostly reports of Chinese people panic-buying rice in New York supermarkets), and fears that news about asymptomatic COVID-19 cases portends a recurrence of the epidemic in China.

The title of an April 9 essay, "Working Together to Maintain Food Security" published in State media is very similar to a 2012 Xi Jinping speech "Working Together to Maintain World Peace and Security." The author--a retired agricultural policy official still engaged in a national food security commission--draws an alarming scenario of a global food crisis with references to the price spike in 2007-08 (the accompanying graphic is a world map constructed of different grains). Like many of the other Chinese articles, this one cites a warning by the UN's Food and Agriculture Organization, last year's forest fires in Australia, and desert locusts now threatening East Africa and Pakistan. The author calls for countries to coordinate food policies while they are working to bring the COVID-19 epidemic under control. Specifically, she calls for cuts in tariffs, reducing trade barriers, working together to maintain supply chains, and making contributions to UN food aid programs to fend off a food crisis (The fact that FAO is now run by a former Chinese agricultural official surely has no bearing on China's great esteem for the organization now). The author cites China's dispatch of experts to Pakistan to advise on their locust infestation and their supply of pesticide and spraying equipment as examples of aid that is needed.

The final section of the essay reiterates the same comforting statistics about China's grain output and plays up another common theme: China's "contribution" to global food security by deploying "precise" policies, poverty alleviation, and holding massive grain stocks. While acknowledging that food crises have complex causes, the author relies on slapdash anecdotal analysis to imply that the United States and Australia were responsible for the 2007-08 food crisis. She forgets that China essentially banned grain exports during the 2007-08 crisis and the "precise" price support policies to cushion the crash in prices that followed all failed massively by creating huge price distortions and mountains of stockpiled grain, cotton, rapeseed oil, and soybeans that cost billions of dollars. As a National Development and Reform official, the author must have designed or overseen these policies. Before this month's food panic arose, Chinese officials were pondering how to offload inedible rice stockpiles next month to make ethanol and other industrial products.

The soaring food prices referred to by the "Working Together" author are missing from Chinese data--except for record-high meat prices that she fails to mention. Japonica rice prices--the target of the panic-buying in Jiangsu, Shanghai, and Zhejiang--crashed last year and have not recovered. National Bureau of Statistics wholesale averages have rice prices well below prices in 2019 and 2018. Similarly, wheat prices were still below 2019 and 2018 prices as of March. New data released today show that the average rice price rose 1.2 percent in the first 10 days of early April and wheat rose 0.5 percent. 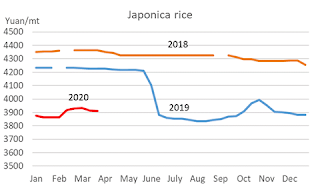 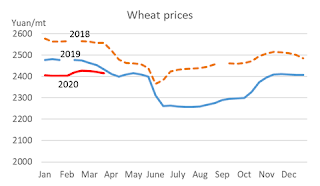 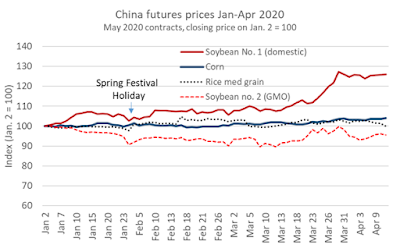 China has already had a food crisis in meat, but this has been declared off-limits in the food crisis discourse. Meat was never mentioned at the April 4 press conference, nor in any of the "food crisis" articles. The National Bureau of Statistics reported that the March 2020 CPI was up 4.3 percent from a year earlier, led by a whopping 18.8-percent increase in food prices that accounted for 3.7 percentage points of the overall year-on-year CPI growth. Drilling down deeper shows that meat is responsible for most of the increase in food prices. Pork prices were up 116.4 percent in March from a year ago, beef was up 21.7 percent, and mutton was up 12.1 percent. No other item in the CPI was up in double digits. Grain was up just 0.7 percent. Most nonfood categories were up 2 percent or less, and many were down from a year ago.


Bottom line is that it remains unclear why Chinese officials, news media, and consumers are worried about a food crisis. It seems that common people in China still have lingering worries about COVID-19 and its possible impact on food supplies. Are Chinese officials trying to scare their farmers to get them out into their fields? Do they know something we don't? Officials seem to be genuinely concerned about potential declines in grain production, yet prices don't seem to be soaring. Is China looking for a better deal from the United States, or a way to wriggle out of Phase I? No signals sent to the U.S. have been made public. Or is China maneuvering to position itself as the new benevolent protector of global food security? Maybe, but they have almost exclusively been talking to a domestic audience up until now. Are they trying to create a narrative about a crisis that comes from abroad to divert attention from their own bungling?

Whatever the motivation, officials in China do seem to be rattled by food security concerns.
Posted by dimsums at 11:15 PM

" it remains unclear why Chinese officials, news media, and consumers are worried about a food crisis."?

Because they're worried about a war? Since everything the US has thrown at China has failed, war is about all that's left.