China's hog statistics smell like a pig pen. Analysts should not hope to track feed demand and meat consumption with any degree of precision using these numbers. Statistics on hogs are inconsistent both in the level of output and the growth. For other types of livestock the statistics are mostly nonexistent and even less accurate when available.

How much pork is produced in China? The National Bureau of Statistics (NBS) statistical communique says that 56.7 million metric tons of pork was produced from 735 million slaughtered hogs in 2014. That's 77 kg of pork per hog (this presumably excludes feet, skin, organs and head although these in fact enter the food supply...the average finished hog is around 100kg).

The official pork output equals 43.7 kilograms (91.7 lbs) per capita, or 1 hog slaughtered for every 1.8 persons in China. That would put China among the top countries in the world in per capita consumption. However, this number is probably inflated far beyond its real value. 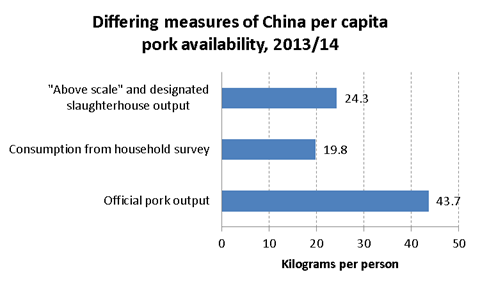 Table 6-2 of The China Statistical Yearbook reports per capita consumption of pork compiled by NBS household surveys for 2013 totaled 19.8 kg (43.6 lbs) per person. That's less than half the amount of pork produced per capita. While this number can be expected to be lower than production per capita, since some pork is consumed away from home and some is wasted, it seems unlikely that these account for half of China's pork. (NBS stopped reporting separate urban and rural consumption numbers in 2013. The rural and urban household surveys have been unified and they now report a single national average for food consumption.)

A report on the official government web site says that 236 million hogs were slaughtered at "above scale" and "designated" slaughterhouses during 2014. This number was reported by the Ministry of Commerce until responsibility was shifted to the Ministry of Agriculture in 2014. It presumably excludes hogs slaughtered on farms and in small or illegal slaughter points, but it is only 32 percent of the number of hogs that NBS reports were slaughtered during 2014. The ratio of the two numbers has stayed at 32 percent for five years. It seems improbable that 68 percent of the hogs are slaughtered on farms and in small-scale or illegal slaughterhouses.

Let's assume that the designated and above-scale slaughtered hogs also average 77 kg of pork--that's 18 million metric tons of pork. Let's suppose that the "above scale" and "designated" slaughterhouses only serve the urban population of 749 million. That gives us 24 kg of pork per person, a number that is consistent with the per capita consumption number of 19.8 kg.

Numbers on the robust growth in pork output are also suspect. Each increase in NBS hog slaughter since 2012 was larger than the increase in "above scale" slaughter. It seems improbable that most of the growth in hog slaughter has been outside the "above scale" slaughterhouses, given that the rural population is falling, the share of the rural population that raises hogs has been falling, and the government claims to be closing thousands of illegal or substandard slaughter points. 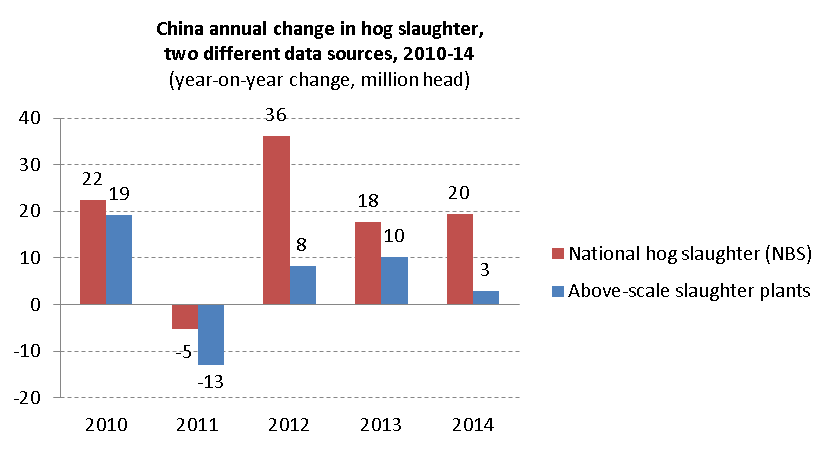 The monthly data reported by the Ministry of Agriculture have shown a major decline in swine inventories  over the past year. In December 2014, the MOA reported that swine inventories were down 7.8 percent from a year earlier, and sow numbers were down an alarming 13.2 percent year-on-year.

The National Bureau of Statistics reported a more gradual decline in swine inventories of 1.7 percent during 2014. They did not report sow numbers. So, did the number of swine fall by 8 million last year (NBS), or by 37 million (MOA)? It's up to you to guess.

How can either of these organizations possibly count the number of pigs with any degree of accuracy? NBS says in its Rural Statistical Yearbook that it uses monthly sample surveys to measure the change in pigs, and it uses the agricultural census from 1996--19 years ago!--to estimate the national total. New farms are constantly popping up, and millions of "backyard" farms have quit. The population of fattening hogs turns over every 4 months or so and fluctuates constantly. The MOA monitors hog inventories at 4000 points, but China has probably 50 million or more hog farms.

Why does it matter that hog statistics are confusing and inaccurate?

In 2009, Chinese authorities announced a program to stabilize the hog market. One part of the program was to publish detailed monthly and quarterly statistics on hog inventories, slaughter, prices, and diseases. The idea was to give farmers better market information so they will form better expectations about the direction of the market and make better decisions about when to expand or cut back capacity. However, these smelly numbers do not provide much guidance. If the MOA numbers reflect reality, Chinese hog producers are killing off their sows in alarming numbers--very similar to the situation in 2006 and exactly the phenomenon that causes gyrations in prices and that the 2009 program was intended to prevent.

China's aspiration to stabilize its markets and to become a world price-setter will never be realized as long as it issues a blizzard of dodgy, inconsistent "statistics" with only cryptic documentation, keeps its statisticians under the communist party's control, and bans any competitors or meaningful outside collaboration for its overworked, undertrained statisticians.
Posted by dimsums at 10:19 PM