Chinese soybean meal prices have been falling since September, ending a brief boom in prices and "leaving only sighs behind" according to a Securities News article.

In June, soymeal prices began rising rapidly, from about 3200 yuan/mt in May to a peak of 4800 yuan/mt in September. There was some concern about the effect of the rising price on meat prices and general inflation. One posting of an article on the topic was titled, "Crazy Soy Meal Affects Xi Jinping's Market Basket."

Since late September soy meal prices have fallen again. During the price boom, soybean processors in China were relying on soy meal for their profit margins, but now they're losing money on both soy oil and meal. Crushers' raw material costs are up due to high soybean prices--related to the drought impacts on the U.S. supply. Processors have not been able to raise soy oil prices due to behind-the-scenes pressure from China's National Development and Reform Commission to hold prices down. The high soy meal prices provided their profit margin during the summer. But after the decline in meal prices processors are losing money on both meal and oil products. Some crushers are continuing to operate at a loss, but others are cutting back on their operations. According to Securities News, people in the industry think soybean crushers are facing a difficult period following the end of the "meal feeds oil" soymeal price boom. 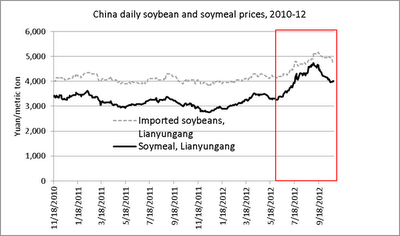 An industry analyst told Securities News that his calculations showed crushers losing 400 yuan on each ton of imported soybeans processed. This is a big turnaround from an 800-yuan profit just a month earlier. The manager of a Heilongjiang crusher asks in frustration, "Where can you find profits now?" He claims to lose money on every ton of soybeans he processes.

The origin of the soymeal price surge is unclear. It coincided with a spurt in soybean prices related to news about the U.S. drought, but the surge in meal prices was more pronounced. The increase in Chinese prices also paralleled a similar surge in U.S. prices; many blame it on speculation. The increase also coincided with the peak hog production season ahead of the National Day-Moon Festival holiday in early October. The end of the peak season is one reason cited for the decline in soy meal prices.

Chinese farmers have been slow to sell their soybeans after the recent harvest. Oil processing enterprises are paying about 4400 yuan per metric ton for domestic beans. However, farmers expect the government to announce a price for reserve-buying of 4600 yuan and they're waiting to see if prices improve.
Posted by dimsums at 9:35 PM