No Insurance Claims for Army Worms

According the Daily Business News, Farmers in Huajiaqiao Village in Jilin Province have experienced heavy losses to their corn crop from this year's army worm infestation, but they should not expect their crop insurance to give them any compensation because insect damage is not considered a "natural disaster."

The article focuses on losses from the worst attack of army worms since 2001. Some farmers sprayed their plots with insecticide four times but still couldn't get rid of the caterpillars. They bought subsidized crop insurance at the beginning of the year, but the insurance excludes insect damage. The reasoning is that insect damage can be avoided (by spraying insecticide) so it is not a "natural disaster." Insurance only covers what we would call in English an "act of God" like hail, floods, wind, and frost.

The problem is that farmers didn't know what they were buying when they paid for their crop insurance. No one in the village had seen a written policy stating what was covered by the insurance. Farmers were confused even as to which company they had bought their insurance from.

Many farmers thought the insurance was offered by Anhua Agricultural Insurance Co., based in Changchun,  but the reporter called that company and was told Anhua does not offer agricultural insurance in Huajiaqiao's county this year. The reporter visited the village accountant who had the policy. The accountant said, "This insurance is offered by Anhua Co., but I don't know why it has 'zhong' and 'hang' characters all over it." The reporter recognized that the policy was issued by another company--Zhonghang Anmeng Property Insurance Co. Anhua had offered the insurance in earlier years, but Zhonghang-Anmeng--a Sino-French joint venture that seems to specialize in aviation insurance--now has the crop insurance business in Huajiaqiao's county.

No one in the village even has a claim form. In order to file a claim, the village as a group must file a report with the township government. A group of them went to the township to inquire about whether the insurance would cover their army worm losses. The township office workers said, "The insurance policy is in the computer. Town leaders went to the agricultural trade fair in Changchun and we don't know when they'll be back."

It was not easy to confirm what the insurance covers. The reporter called the Zhonghang-Anmeng company's headquarters and got in touch with the company's county representative by phone. The county representative told the reporter that army worm damage would not be covered because the policy clearly excludes insect damage from coverage. However, he said the company would have to coordinate with the government and it wasn't clear what form that would take. His response indicated that a decision about covering army worm damage would be made above his pay grade: "As a county branch of the company, we can't solve every problem." He promised to make inquiries and get back to the reporter but never responded.

The reporter found documents specifying that only damage from flood, waterlogging, hail, drought, frost and freezes would be covered. Losses from rodents, insects and weeds were specifically excluded.

A farmer in Huajiaqiao village said, "If we had known insect damage isn't covered, we wouldn't have bought the insurance." Even when incidents are covered, the calculation of indemnities is complex. Losses of 30 percent or less are not covered. Only the losses above 30 percent are covered, multiplied by various "loss coefficients." A farmer named Li estimates that he lost 30-40 percent of his crop to insects this year. He would only be compensated for any losses over 30 percent. He said the farmers could bring suit against the insurance company in court but they would surely lose.

Farmers have a history of trouble filing claims. Last year, there was hail damage in the county that resulted in lodging and losses of 80 percent of the corn crop. They reported the loss to the township but never got any response from the company. 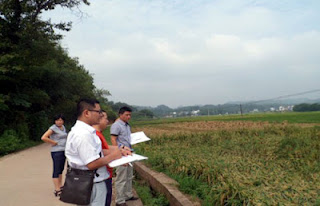 In reality, agricultural insurance indemnities are paid in an ad hoc manner at the discretion of the government. An article from Shangshan town earlier this summer reported that the local government held meetings and closely coordinated with the insurance company to cover losses from plant hoppers (an insect) and typhoons. In July, it was reported that compensation for wheat scab (a plant disease) losses would be delivered to farmers by the end of the month. The information was provided by the provincial government's finance department.
Posted by dimsums at 9:23 PM