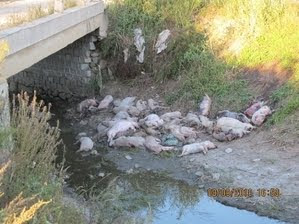 The overseas Chinese news service, Epoch Times, has reported a serious epidemic of swine fever in the northeastern part of Heilongjiang Province, centered in and around Shuang Ya Shan city. The Chinese press is not reporting it and officials will not talk about it.

In Jixian County, Yong’an Town, Lianming village previously had over 200 sows that started dying in July, and now there are about 20 left. A villager named Lin said, "Most of the pigs in this area have died. In particular, breeding hogs have nearly all died. There are piles of dead pigs and their rotting offal pollutes the river water. The whole village stinks and it’s hard to breathe."

The epidemic is also serious in areas of Jiamusi and Suihua muncipalities. One post on Baidu said, "There is a serious epidemic among pigs near Harbin. Could this be African Swine Fever?"

The government is not reporting it, and phone calls by reporters to local government offices went unanswered. Rumors are spreading that the disease may be transmitted to humans.

According to reports from local people in the areas affected by the swine fever epidemic, some of the dead pigs have been butchered and sold at a discount as frozen pork. In the afflicted areas, however, the meat sellers have shut down and no one dares eat pork. People are eating only vegetables and fish. They can only eat fish raised in ponds since the dead pigs have polluted the river water.
Posted by dimsums at 3:27 PM