Combined sales by listed companies were up about 30 percent from 2021. The largest company, Muyuan, has tripled its output since 2020. Muyuan sold 61.2 million head last year, up from 40.3 million in 2021 and 18.1 million in 2020. Wens Foodstuff recovered its number-2 position with 17.9 million head after seeing a dramatic drop during the African swine fever years of 2019-20. Financially troubled Zhengbang Sci-tech saw a decline in sales while New Hope Group had another year of expansion. [update: National hog slaughter increased 4.3 percent during 2022, according to the National Bureau of Statistics.]
China's hog prices, meanwhile, had another roller coaster year. Average Chinese hog prices fell to about 15 yuan per kg--roughly $1/lb--in early January 2023, about where prices started the year. The current price is below production costs announced by listed companies that ranged from 15.5 yuan per kg for Muyuan to 18.4 yuan for several other companies. Hog prices reported by the National Bureau of Statistics were below production costs during the first half of 2022, soared to highly profitable levels during July-October. Prices then plunged to loss-making territory as the year closed out. Many listed companies reported 20-percent declines in price during December 2022, and average prices dipped another 5 percent in the first week of January. 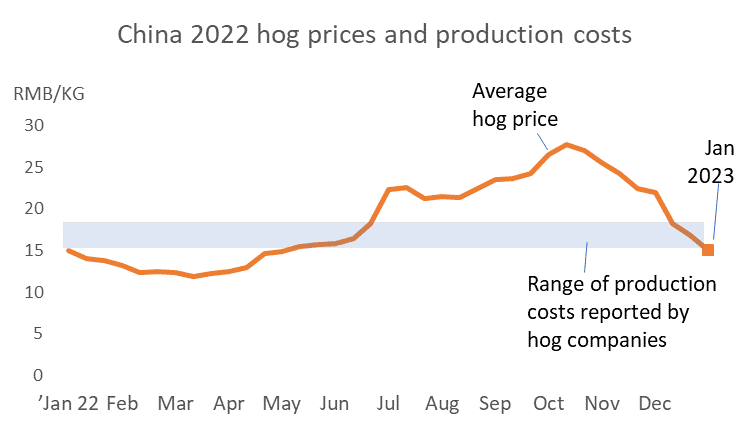 Market reports say large volumes of hogs have come on the market, including many that were held back for "second-time fattening." Consumption during the traditional holiday peak season has been disappointing with virus transmission peaking in cities during December and with a slow Chinese economy. Some farmers are still holding back hogs from the market that could be slaughtered after the Lunar New Year, maintaining a degree of downward pressure into February.

China's National Development and Reform Commission is alarmed by plunging hog prices. The Commission promises to buy up pork for reserves, is calling in hog company executives to discuss the situation and promises to scrutinize markets for price manipulation.