The paper recites vague phrases like "keeping Chinese peoples' food bowls tightly in their own hands," a mantra that has been repeated as in speeches and communist party documents since Xi Jinping's ascension to party chief in 2013. The Chinese version of the white paper has an emphasis on self-reliance that is largely scrubbed out of the English translation. The Chinese version advocates a "path to food security with Chinese characteristics" (中国特色粮食安全之路) that is translated as "food security in China" in the English version.

The food security policy is stated in a series of opaque phrases that call for China to remain self-sufficient in grain most of the time by ensuring domestic production capacity while allowing for undefined "moderate" imports.

Key measures for maintaining China's production capacity are encapsulated in another inscrutable couplet, "藏粮于地, 藏粮于技" (storing grain in the ground, storing grain in technology) translated as "sustainable farmland use and innovative application of agricultural technology to increase farmland productivity." Strict zoning, control of land use and government planning are featured measures. The paper claims that Chinese technology has achieved most of the dramatic increase in food output over the last 20 years.

A third section of the paper boasts that China is playing a more assertive world in global food markets. According to the paper, China:
The "new" food security policy is a more vague statement of a 1996 white paper, "The Grain Issue in China," that specified a 5 percent limit on imports in normal years for a specific list of grains, beans, potatoes, and soybeans. That limit was cast aside and soybeans were excluded from "grain" after soaring soybean imports blew through the 5-percent limit. The "new" policy uses vague language about "moderate imports," basic self-sufficiency and absolute security that are not clear in Chinese or English. Since 2013, the policy has not set a concrete self-sufficiency criterion, nor has it specified commodities.

The vagueness gives the policy an elasticity that allows officials to interpret it any way they want, depending on the circumstances and audience. With no numerical target, they can never miss it. The more assertive global role in reshaping food trade is a new addition to the post-2013 food security policy that aspires to give China a "voice" in global food markets and represents a subtle challenge to the United States whose government and companies China believes unfairly dominate markets and rule-setting at present.

While the 2019 white paper emphasizes government control and planning as key to food security, it also acknowledges that raising prices and cutting taxes on farmers were critical to improving incentives for farmers. The white paper does not consider the possibility that privatizing farmland might awaken rural credit markets and give farmers incentives to make their own investments in farmland instead of waiting for subsidized programs to do it.

China's white paper neglects to count the cost of its food security policies. Spending on agricultural programs has soared. Farm spending reported to the WTO rose from $30 billion in 2002 to over $200 billion in 2016. Most of the expenditure is on so-called "green box" programs that are exempt from WTO-imposed limits on farm spending. The most prominent are the program to build "medium and high standard fields" and irrigation infrastructure. In 2016, three direct payments to grain producers were lumped into one, renamed a "land fertility payment", and moved into the "green box." Payments to corn, soybean and rice growers are also kept hidden from prying foreigners and falsely declared "blue box" measures so they can also be exempt. This year's direct payment to soybean growers in Heilongjiang Province is equal to about half of the gross value of the crop.

China claims to have "reformed" its support price program for wheat to make market-oriented purchases predominant, but this year's government purchases amounted to 30 mmt out of 70 mmt of wheat procured. In Anhui Province half of the wheat marketed this year was purchased through the minimum price and the local news paper claimed the support price effectively raised prices for farmers by 10 percent. 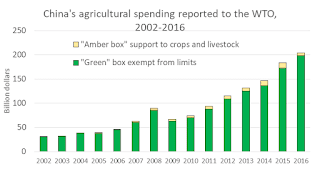 The white paper trumpets China's success in "reforming" support price programs for corn, soybeans, rapeseed, and cotton. These were ill-conceived, costly programs begun in 2008-10 that exported instability to world markets by prompting import surges followed by years of suppressed imports as officials sought to offload massive stockpiles. The full cost of these programs is not counted in its reporting to the WTO. In the most egregious example, the 167 mmt of corn sold from the "temporary reserve" stockpile the last three years cost an estimated $31.7 billion, including costs of storage, interest and losses incurred by selling grain at prices 18% to 38% below their purchase cost. This is how China "works hard to fulfill its WTO commitments."

The 1996 white paper promised to reduce waste of grain, but holding excessive grain stocks--another core "food security" policy--is hugely wasteful. Large areas of land and chemical inputs are used to produce grain that is stored in hundreds of warehouses where it rots or is eaten by rats and insects. Authorities have kept secret the results of a nationwide audit of grain reserves carried out this year, but there are hints that much of the grain is poisoned by mycotoxins and heavy metals. After the audit authorities published admonitions that grain reserves must not threaten "food safety."

China's 1996 white paper promised to reduce crop production costs, but instead the self-sufficiency policy has resulted in soaring costs and prices of Chinese food commodities. China's wheat price, for example, has drifted far above U.S. wheat prices. China's wheat price was more than double the U.S. price in 2016 and was 80% higher in 2018. The difference is maintained by China's price floor and tight control on imports using a restrictive import quota system. 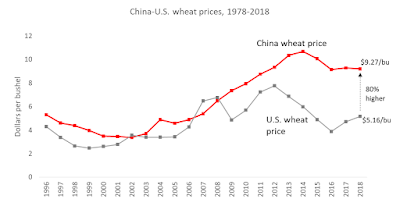 The 2019 white paper celebrates China's rise in meat consumption. While authorities have myopically sought to stabilize grain markets at huge cost, the country's livestock production is routinely rocked by boom-bust cycles, diseases like avian influenza and African swine fever, and food safety crises like the melamine adulteration of milk. Grass roots veterinary services and animal health have been neglected for decades. Gyrations in the Chinese livestock market also spill over into the world market by creating unanticipated ebbs and flows in China's demand for imported meat. 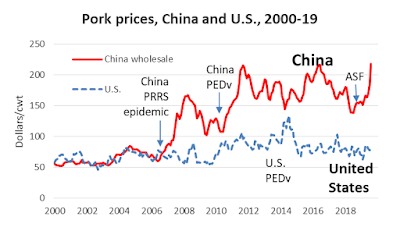 The 1996 self-sufficiency policy directly led to environmental costs that remained hidden for years. The 1996 white paper called for farming "wasteland" on mountainsides, grassland, and river bottoms, which had to be reversed later via a subsidy to retire erodible land. The 1996 paper also called for cultivating abandoned factory and mining sites--an initiative that ignored the possibility that such sites are often polluted with lead, cadmium, and arsenic. Authorities hid the contamination of rice with cadmium from metal smelting for years. Subsidized chemical fertilizer and pesticides led to excessive use, huge run-off and eutrophication of rivers and lakes.

"Enlarging irrigated areas" was a solution offered by the 1996 white paper, but underground aquifers were pumped dry to grow wheat in north China and rice in Manchuria. Land is now being retired in both regions to cope with the problem. High prices guaranteed by a price support prompted farmers to plow up grasslands to plant corn. All these problems were created by China's food security policy despite a principle of "realizing sustainable development" promised in the 1996 white paper.

The white paper presumes that the communist party's policy is the only way for China to be food-secure. However, several East Asian neighbors achieved dramatic improvements in living standards years before China. In the years after World War II, U.S. advisors designed land reforms, farmer cooperatives, and rural credit systems in Japan, South Korea, and Taiwan, laying a foundation for improvements in farm production. U.S. advisors were invited to China in the 1940s by the Nationalist leadership, and might have helped develop the mainland's agriculture decades earlier if civil war had not brought their efforts to a halt. Communist China leaders today are still working on many of the same agricultural problems identified by U.S. advisors during the 1940s.

In other words, the same food self-sufficiency policy that every country on earth implements.

China has to be looking at synthetic meats. I suspect a world leader.

Thank you for this very detailed analysis.

I have a question though. I was surprised by a sentence : " The "new" policy uses vague language about "moderate imports," basic self-sufficiency and absolute security that are not clear in Chinese or English."

In some Chinese documents, one can read : "韩长赋强调，立足国内实现粮食基本自给的方针必须长期坚持，要确保水稻、小麦、玉米三大主粮自给率保持在95%以上，其中水稻、小麦两大口粮保持100%自给。" So I thought that rice+wheat self-sufficiency rate was 100%, rice+wheat+corn = 95%

Even if these percentages are not written in official documents, government officials clearly explain what these terms mean. no?

It looks like Han Changfu gave the 95%/100% numbers in a speech in 2013. That's the only time I have seen those percentages cited in an official public speech or document since December 2012 when the "new" food security rhetoric was introduced. An article in early 2013 by the State Council's Development Research Center said the new food security policy doesn't have fixed percentages of self-sufficiency.

Regarding Chinese subsidies and WTO, a support in the blue box is placed there if the support also requires farmers to limit production. But soybean production keeps increasing.

So how can China declare the new soybean payments into this box?